The Tamaki Drive Waterfront Ride is possibly Auckland’s most ridden road. Regardless of where you live or are staying, this is the place to ride. During the Summer ride at 5am, and Winter at 7am to see the sunrise. Equally, ride at 9 pm during the Summer, or 5:30 during Winter to see the sunset. It’s quite simply unparalleled.

There’s really little point telling you how to get there. All we can do is point out some of the points of interest. Travelling from the city you can go up Gladstone Road to the first carpark upon the hill. This gives you a great perspective of the shoreline. Directly opposite you is the port, and just to the left is Mechanics bay.

Mechanics Bay is where the police and rescue helicopters take off and land. It’s a great spot for passing a few minutes. As you head further away from the city you’ll always be aware of Rangitoto on your left. Such a perfect volcanic cone, make sure you take the time to visit it, and hike to the top. 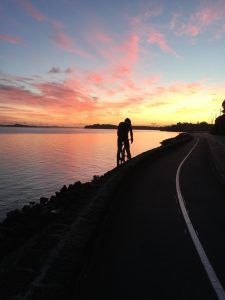 Moving along, the first village you get to is Mission Bay. Make sure you grab a bite to eat or ice, even stop off and go into he cute retro cinema.

Mission Bay sits on three parcels of land comprising part of the Kohimarama block bought from the Crown in the early 1840s. The area used to be referred to as ‘Kohimarama’, a name now given to a neighbouring suburb Kohimarama. Present-day Mission Bay takes its name from the Melanesian Mission, which was established by the Anglican Bishop George Augustus Selwyn at the bay at the end of the 1840s. The school also known as St Andrew’s College, was an Anglican institution set up to provide Melanesian boys with a Christian education. The stone buildings, designed by Reader Wood, date from 1858 and are built of scoria rock quarried on the volcanic island of Rangitoto.

Leaving Mission Bay, your next stop is Kohimarama. This is where Café on Kohi is located. Definitely stop either here or the Store for coffee and pastries. Kohi, as it’s called, isn’t very big, and most of the historic architecture has been replaced by architectural monstrosities. That aside, it’s village feel is authentic.

The final stop en route is St Heliers. There’s a sandy beach and great little village here. It’s possibly worth having some dinner here, at one of the many restaurants if you’re cruising during the evening.

One word of caution, Tamaki Drive is a very busy road. There is a combined cycle and walk way, so it may be wise to use that if you’re just cruising. If you’re going quickly then it’s wise to use the road, just have your wits about you. Auckland car drivers can be very aggressive.

Bays of the city

Along the harbour shore between Point Britomart and St Stephen’s Point in Parnell were four bays; Official Bay, Mechanics Bay, St Georges Bay & Judges Bay(some of these bays have now disappeared due to land reclamation and the quarrying of the bordering headlands). Closest to Point Britomart was “Official Bay” so-called because most of the Government Officials during the 1840s chose to live there.

Almost continuous with Official Bay was Mechanics Bay (so-called because this was where the labour force that the government had brought with it to construct the new Capital were housed). Mechanics Bay contained the mouth of the stream issuing from the Springs in the Domain to the south. The Bay had a broad, flat beach where Māori had long been in the habit of beaching their waka (canoes).

Next to Mechanics Bay was St Georges Bay and then “Judges Bay” so-called because three of the magistrates of the early colony built their houses there. Next to Judges Bay is St Stephen’s point, where a small chapel was built.

As early as the 1860s this shore front began to be modified by the European settlers. In particular it was in order to get the railway tracks around to the bottom of Queen Street that Point Britomart was quarried away and Official Bay & Mechanics Bay filled in. Initially the railway tracks came through the gully that lay between the Auckland Domain and the suburb of Parnell, but later when a second route was formed further to the east through Meadowbank the shoreline between Mechanics Bay and Hobson Bay was also modified. This was when St Georges Bay ceased to exist and became the shunting yard for the railway station and Judges Bay was separated from the Harbour by a railway embankment.

The major thoroughfare of Mechanics Bay is Beach Road, so-called because it once ran around the beach front of the now reclaimed Mechanics Bay. Here is located the former main Auckland railway station, an impressive brick 1930s structure, designed by Gummer and Ford.

A tiki tour to Onetangi, Omiha, Oneroa from Palm B